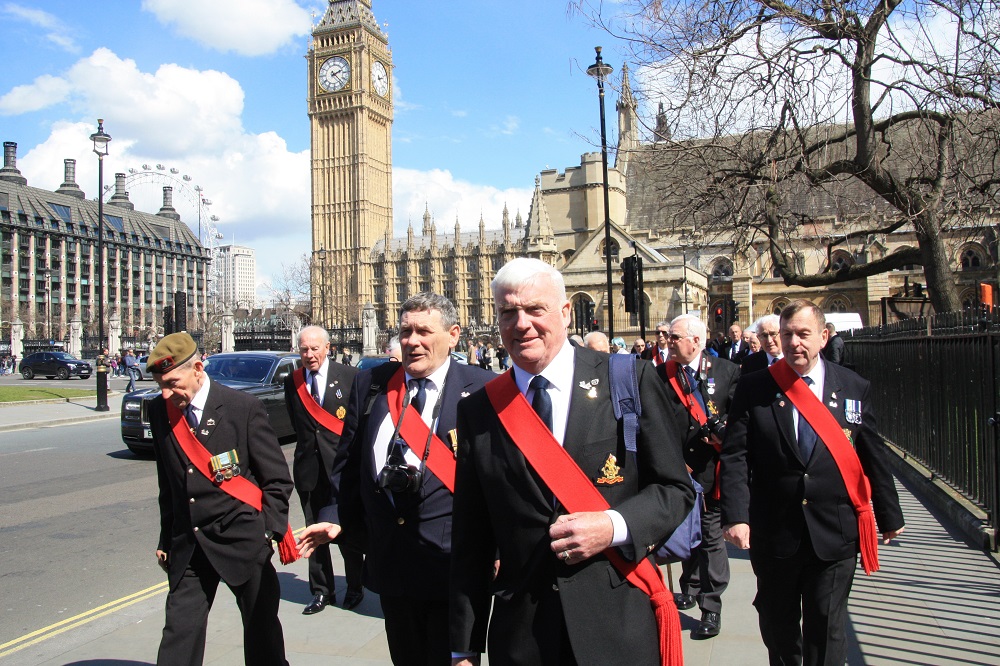 At 07:00 on Wednesday 27th April 2016 on a cold but sunny morning, twenty eight veterans gathered at Mirfield Railway station to start their journey to London to visit the Houses of Parliament. Role call and the first of many head counts took place before they boarded the train and departed Mirfield on time at 07:28.

Their journey was with Grand Central Railways and the service the veterans received was exceptional. After some initial confusion as to which carriage they should be in, one of the Grand Central managers ensured that all the veterans were put into the same coach. Once they were seated, the driver for the second part of the journey came to speak to the veterans. They were offered free tea and coffee for the duration of the journey and the stewardess passed biscuits out to everyone as she went through the carriage.

The train passed through Wakefield, Pontefract and Doncaster and then it was non-stop all the way to London reaching speeds of up to 125 miles per hour. After leaving Doncaster, the driver who carried out the first part of the journey joined the veterans and sat with them for the remainder of the journey. The journey was over in no time at all and the train arrived at King’s Cross, London at 10:15.

After a quick photo shoot on the platform at King’s Cross, and after bidding farewell to the staff of Grand Central Railways, the veterans piled into five taxis and were whisked away to the Houses of Parliament. They entered via the visitors entrance and went through security at 11:20 then made their way to Westminster Hall to wait for their tour guides.

The veterans were then split into two groups and given guided tours of the Houses of Parliament. The tours offered a unique combination of one thousand years of history, modern day politics and stunning art and architecture. Although the first group’s tour lasted a lot longer than the second group, all the veterans got to see the same things as they were accompanied through the House of Lords. Unfortunately, at the time of the veterans’ visit, the House of Commons was closed to members of the public due to Prime Ministers questions taking place.

Highlights of the tour included:

On completion of the tours, at around 13:15, the veterans were met by the secretary to their local Member of Parliament, Jason McCartney, MP, who escorted them to a briefing room within the Houses of Parliament for a question and answer session. After Mr McCartney introduced himself and had given a brief description of his job and the roles that he covered, questions were raised on subjects such as service pensions, leaving/remaining in the European Union, and the campaign to save Huddersfield Royal Infirmary. Mr McCartney was up to scratch on all the subjects covered and was able to answer all the questions that were thrown at him.

The question and answer session overran slightly and ended shortly after 14:00 when the veterans concluded their visit to the Houses of Commons. After leaving Parliament, they took a short walk through London to the Cellarium Restaurant in Westminster Abbey where they enjoyed a three course luncheon.

After lunch there was another short walk to the Thames Clipper Station at the London Eye, where the veterans boarded a riverboat at 17:00 for a round trip to Greenwich. It was an enclosed boat but there were plenty of opportunities to take photographs as they passed along the River Thames. The boat returned to the London Eye at 18:30 where the veterans disembarked. There was a short wait for taxis to take them back to King’s Cross station, where there was a final headcount before boarding the train back to Mirfield.

The train left King’s Cross station at 19:52 and travelled non-stop to Doncaster, then through to Pontefract and Wakefield and arriving back at Mirfield at 22:10, ending an interesting and enjoyable day out in London.

This site uses Akismet to reduce spam. Learn how your comment data is processed.

There are no upcoming events at this time.